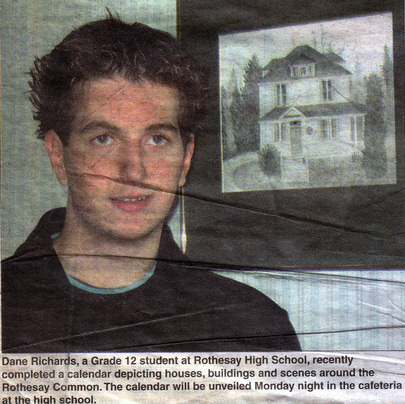 By Paula White
For This Week

A calendar containing 12 picture drawings of homes, heritage buildings and familiar scenes in and around Rothesay Common is now on sale.

Ten buildings- including homes, churches and the fire station- as well as the cenotaph and the footbridge were captured by artist Dane Richards, a Grade 12 student at the Rothesay High School, in the Sketches in the Common 2001 calendar. It portrays a variety of architectural styles, from the sharp angles of St Paul’s Church Hall to the shadowy elegance and natural landscape of the home located at 14 Hampton Road- Mr. Richards’ personal favorite.

“It’s more unique of a house than the rest of the houses,” he said. “The one I liked drawing the best is the outside one in the commons (which includes the footbridge) because it gave me a break from drawing houses.”

Mr. Richards first began working on the drawings last spring, following a request by the Rothesay Preservation Review Board (RPRB). Brian Perkins, an art teacher at Rothesay High School, asked his students to draw scenes of interest around the Commons. Mr. Richards chose to do the fire station and the Dutch Colonial home on 8 Church Avenue in varying grades of pencil. The students’ drawings were presented to the RPRB (which is chaired by Peter Buckley).

When they saw Dane’s drawings… they immediately thought of doing a calendar,” Mr. Perkins said. “There were other students who had work as good, but his really stood out.”

After a summer break, Mr. Richards began working on the rest of the drawings when he started school in the fall. Once they were finished, he took them to Mariflex Ltd., a printing company, and put the calendar together.

“He’s had a hand in every stage of the process including stapling and folding, “ Mr. Perkins said. “It’s been a learning experience all the way along.”

The calendars will be unveiled at the reception in the school cafeteria on Monday night from 7 to 9 p.m. They are being sold for $10 apiece but there are only a limited number available before Christmas.

For the first printing, the RPRB ordered 400 calendars. Should those sell out (and it appears they may), any orders for more would not be guaranteed before Christmas.

“You can’t beat it. It’s a high-quality product. There’s nothing in it to any degree that doesn’t say its professional.”

The proceeds from the sale of the calendars will go to the graduating class. Mr. Richards will also be selling the original prints, which have been framed and matted, at the unveiling.

The RPRB is a committee that was set up in 1997, prior to the amalgamation of Rothesay with

surrounding communities. It’s goal is to preserve the area surrounding the Rothesay Common as a heritage zone. This means any new construction or new developments must be approved by the board first.

One of the board’s interests is the architectural style of the buildings in the designated heritage area, which is why it was eager to have Mr. Richards’ drawings made into a calendar.

“I think it exceeded their expectations by a long shot,” Mr. Perkins said. “They were looking for exemplars of certain architectural styles or buildings that had maybe a social significance.

“I can see it as an ongoing thing. It’s going to be continuously updated because they want to create a catalogue of significant buildings in the entire area.”

But the RPRB wasn’t alone in it’s support of the calendar. In fact, the project was a joint effort from the town, the high school and the Rothesay Living Museum, of which Mr. Perkins is curator.

The museum’s goal is to develop a historical collection of each community in the Rothesay area. It’s first project, a collection of digitally-enhanced historical photographs of Renforth , was completed in the summer.

With the completion of the calendar the museum now has a project that focuses on old Rothesay. Information, photographs or artifacts pertaining to any area in Rothesay were always welcome.

“Any residents who would like to take part are more than welcome,” said Mary Jane Banks, Rothesay’s Director of Administration Services.

To coincide with the two projects, two areas of the school have been renamed in honour of the communities.

The library is known as the Renforth room and the cafeteria has been dubbed the Rothesay Room.

Mr. Richards is an advanced placement art student. He’s enrolled in an enriched art program at RHS (with a specific focus on drawing) that will allow him to earn a university credit this year.

This will help Mr. Richards when he attends the arts and crafts college in Fredericton next year.

Although he plans to pursue a career in fashion design, he appreciated the experience of producing the calendar.

“It’s a real-world experience,” Mr. Perkins pointed out. “The problem is he’s getting popular in an area that he doesn’t really want to focus on professionally. But it gives him a tremendous opportunity.”

“It’s good that I’m getting the recognition and it’s good for my portfolio,” Mr. Richards added. “A lot of people have been asking me their houses and stuff for Christmas gifts.”

The calendars that haven’t already sold are available at several businesses in the Valley, including the Bank of Montreal, Kennebecasis Drugs and Colwell’s Grocery. When they run out, orders can be placed through Mr. Perkins for more.
Back to Articles