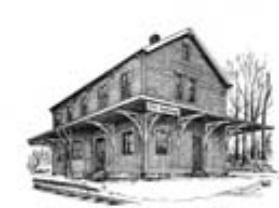 To trace the early history of the Rothesay Railway station is to dive into the preconfederation era of Canada when this country was still very much dependent upon England.

The first practical locomotive was constructed in 1829. The first railway in New Brunswick was the European and North American Railway and the contract for the construction of the line form Saint John to Amherst and also from Saint John to the United States border was signed in Saint John on Sept. 29, 1852.

Lady Head, wife of Sigmund Head, the governor at that time, turned the first sod on the railway. However work progressed slowly and it was not until 1858 that the railway extended as far as the Kennebecasis station (now Rothesay).

The Rothesay station was built by Alfred Harris at a cost of $2 500. The contract was dated Oct. 3, 1857 and called for a two storey- passenger station, 50 feet by 28 feet and a platform 100 feet by 30 feet. The station was to have both women’s and mean’s waiting rooms, and a station master’s office. There was also a magistrate’s office. Upstairs was a large four-room apartment complete with kitchen and cold running water and three fireplaces.

On April 3, 1858, Harris was awarded another contract to build a pumphouse, 18 feet by 18 feet and a woodshed.

The first train arrived at the Rothesay station on June 1, 1858. The railway was not quite finished but there was no obstacle preventing the train from running. The train ran every day from Saint John to Rothesay after June 1st, excepting Sundays.

The first stationmaster at the Rothesay station was a colourful man named Marianus Cuming. He moved to Rothesay in November, 1858 with a large family, to organize timetables, fares, methods of shipping goods and passengers.

Originally from Scotland, Cuming was brought to New Brunswick to organize and build a college of veterinary surgery. This plan was eventually aborted and Cuming decided to accept the job as Stationmaster.

Cuming had been a veterinarian in Scotland, and was also an inventor of some skill. He had written a number of scientific papers and had been, while in Saint john an editor of a tri-weekly newspaper called the Saint John Courier.

Unfortunately, Cuming died soon after accepting the post as stationmaster.. .

The station at that time was known as the “Kennebecasis Station” but in honor of the visit of the Prince of Wales the name was changed to Rothesay after one of his titles.

In 1860 Miss S.E. Davidson was named stationmisstress and she held that position for quite some time. In February 1862, a wood train smashed into a passenger train killing a woman and a child. The passenger train was stopped at the Rothesay Station for food and water. Six people were injured along with the two deaths.

A Coroner’s inquest into the accident brought a verdict of accidental death. Ice had formed on the tracks and because of the slippery conditions the wood train was unable to stop. . .

The station was open until midnight each day. Mrs. Horton Saunders, daughter of a station master said “My father would work from 3 a.m. until 4 p.m. when the afternoon man would come in and work until 12.

“There were a lot of people traveling by train in those days,” she said. “I used to travel to Moncton quite frequently to visit relatives there”.
“My Father was responsible for the complete running of the station, selling of the tickets and the tacking of telegrams.” she said. “I remember an Indian woman who would come in two times a week to scrub and clean the station”.

“The station was a very busy place in those days”, she said, "A great deal of freight came through. But there were very few passenger cars.”
Douglas Wright has lived in Rothesay all his life, and his father had worked at the station of baggage master between the years 1895-1905.
His earliest memories begin around the year 1920, when he was seven. “Everyone commuted by train,” he said, in and out of town.- In the mornings there was a 7 o’clock train called the Hampton train. At 8 o’clock the Sussex train would pass through. In the evening two trains would leave Saint John- the 5:15 and the 6:15.

“The station was for a long time a centre of community activity. The first village meetings were held there until 1866 when the St. Paul’s Church was built.

“A lot of baggage came in on the train,” he said. “Some of the freight trains were large with between 50 and 60 cars.

“I can recall three separate train wrecks,” he said, “one in 1903, one 1923 and another 1936. All three of the accidents took place at the same spot, a turn, where the Rothesay Tennis court is now. The turn was very sharp,” he said, “and sometimes the trains would be going so fast that they were unable to navigate the turn.”

“After 1940 the activity surrounding the station began to gradually go down,” Mr. Wright said, “and in the 70’s there wasn’t much doing.”
Mrs. John Sayre is another inhabitant who has many fond memories about the station.

“Rothesay was a village then and everyone went down to meet the train. As children we used to always be playing around the station, and we knew how to look after ourselves around the tracks, you see, we grew up with the trains.”

“We use to put pennies on the track when the train was coming and watch it go over them. They would get very badly flattened. We were warned not to put anything big on the track because it might wreck the train.”

“Many people went to town to shop in the market and the grocery stores, I would go with my mother sometimes,” she said. “Parcels would be delivered by the train because the express was free. We would also do down to the station after papers.”

“There were many wagons and carts around then, Mrs. Sayre said, “but the big thing would be to go and meet our fathers coming from town. My father used the train regularly for his travel to and from Saint John.

“When the buses came in” she said, “I believe it was in 1926, a lot of people started taking them. The bus would stop at each person’s home and would drop you off up town The train station then became, more or less, just a flag station.”

John Brock of Rothesay remembers one story which his father used to tell concerning the station.

The incident involved a disagreement over politics, “it was close to election time,” he said “ and people would gather in the station and while they waited for the train they would hotly discuss the upcoming election.”

“These discussions often to arguments,” he said. “One time there was a fellow who, supporting one side, because involved in a heated disagreement with three brothers. These brothers were big, burly men who were quick to anger”.

“Just as the argument was at its peak the train was heard coming and the people in the station and went outside it. There were bars in the windows of the station house at that tie and the three brothers bent the bars, stuck the fellow’s head in between them, bent them back and left him there, causing him to miss the train.”

“There are other stories of the station which my father use to tell,” Mr. Brock said, “but this is the one which I remember most clearly.”

Mr. Maskey said there are many pictures and stories yet to unfold about the Rothesay station “but right now we need community effort and support, starting right now, to raise money.”

“We also want people to share their memories of the station funny or sad,” he said, “write it down and send it in. These stories help to show the building is a living part of our community.”
Back to the Rothesay Train Station