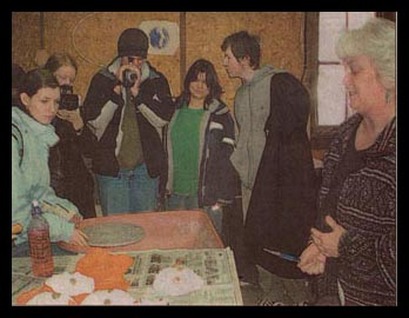 The endeavour is the next step in the students’ storytelling careers as they develop their technical abilities while capturing a little bit of their community’s history. The resulting 15-minute documentary will become part of the Rothesay Living Museum’s ongoing Voices of Women project.

“It will also be a promotional tool Carol can use to promote her work,” said art teacher Brian Perkins, who is overseeing the project.

These filmmaking friends first got together then they would hang out in Mr. Perkins’ classroom, sharing their love of animation and cartooning. Starting out as the haunted Hand Comics Club, they have since gone on to develop scripts and scenarios based on their interest in role playing games, filmmaking and animation.

This live action work with Mrs. Taylor comes after the friends completed a stop-frame fantasy animated piece. Diving into all aspects of the work, they developed the script, dialogue and soundtrack, as well as did the editing and burned the finished DVD themselves.

Using Lego building blocks and modeling clay, they quickly learned how much hard work goes into creating even the shortest video clip. But instead of being daunted by the effort, their appetite was only whetted. That’s when Mr. Perkins suggested the students look outside the school walls for the subject of their next video projects.

Mr. Perkins and fellow RHS teacher Todd Ross will assist students with filming and story continuity, but the creative part will come from the students themselves. The students were filming during Mrs. Taylor’s recent show at her McLaughlin Drive studio. They will also be following her as she prepares for a group show, Art and Artifacts, at the New Brunswick Museum in Saint John in May. Her contribution will be a many-faced sculpture. The resulting video footage will then be edited and processed with the aim of a finished product at this time next year.

“We’re doing not just the main film, but a film about making the film,” said club member Sarah Millican. As a flautist, her interest lies in the musical side of things. “So really, were doing two films at once.”

Each member of the group brings their own talents to the mix. Heather MacDonald is the artistic one, while Ian Donegan and Geoff Sayre work on the technical side. Kerri Sanipass helps get the ideas on paper with her drawings, while Patrick Mulligan keeps the group excited with his energy and overall enthusiasm.

While they have a basic idea of how they would like the finished piece to look, the students are also letting the subject influence where the tale goes. The result will be a free and fun look at the creative process that they can be proud of and that others can enjoy.

Curator's note: due to contract negotiations between the government and the teachers this project never materialized.
Back to Articles