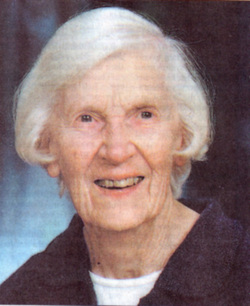 A lady who always had room in her busy life for others now has a room dedicated to her.

Friends and family members gathered at Rothesay High School on Tuesday evening to dedicate the Rothesay Room. They did so in honour of a woman who was active in numerous community projects until the day she died. Mrs. Sayre, of Rothesay passed away in September at 86 years old.

The multipurpose centre, to the right of the school’s office, has her portrait above the door, and samples of her research hanging on the walls. The display, entitled Authors, Artists and Athletes, is a testimony to Mrs. Sayre’s many hours spent gathering details and photographs of people who have contributed significantly to Rothesay. Through their creative and sporting abilities, those featured have inspired and made their neighbours proud, many leaving their mark on a provincial, national and international level.

Now, the next generation of artistic and athletic achievers will be practicing their craft in this room perhaps receiving encouragement from the many faces they will see around them, said Brian Perkins, curator of the Rothesay Living Museum and a teacher at the school.

“It’s a chance to celebrate and pass on some of her work,” he said.

He remembers Mrs. Sayre, a founding member of the Rothesay Living Museum, as a lady "who was very bright, and had a good sense of humour.”

He is also grateful for her meticulous record keeping and thorough research which went into the building of the museum records.

For her, the work was not just about recording dry facts from the past, but sharing the heritage of her community with the current and future generations.

Bringing history alive through photographs, stories and artifacts was important for Mrs. Sayre. It was a way to make today’s children aware of some of the people who have called Rothesay home. Grade 11 student  Caitlin Moore has created a pencil portrait of Mrs. Sayre that will hang at the room entrance.

The room is the second in the school dedicated to a Rothesay pillar. The Renforth Room in the next hall houses library material and pays tribute to the famous oarsman, James Renforth, and the sport of rowing.

History recording was just one of the ways Mrs. Sayre contributed to her town. She also made local history herself. Her community work extended to helping found and run the Kennebecasis Valley Food Basket for 19 years, as well as being an active member of St. Paulís Church. She was the first treasurer of the Catherine E. Black Chapter of the IODE, a member of St. Paulís Anglican Church Vestry, ACW and Altar Guild and the first Woman Warden in her church. She was also the wife of Geoffrey Sayre, Rothesay’s first fire chief and another pillar in the community.

A Rothesay Living Museum web-site is growing daily as much of the material is made available electronically. Mr. Perkins is excited about the latest development as it makes the work of the committee over the last six years available worldwide. Besides being easier for local residents to access, it makes those who have moved away or those who are curious about the history of the community able to learn more at the click of a mouse.